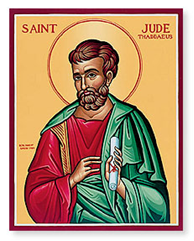 The History and Legends of St Jude.

Who is the saint that we are about to ask for his intercession?

Our parish is under the patronage of St Jude, a saint whose statue we can see in the church. The statue presents us with a man holding a large club and holding at his breast an image of Christ.

He is among the favourites of the saints in the heavens. His patronage of ‘Hopeless Cases’ has brought him a fame which, as we will see, wasn’t true of him in the beginning of the Church’s life.

There are four lists of the twelve apostles in the Gospels. In Mark and in Matthew the list includes one Thaddeus or in some ancient versions Lebbaeus. (Mt 10:3 & Mk 3:18). This Thaddeus is not mentioned anywhere else except in these two lists. In Luke’s Gospel and in his Acts of the Apostles the eleventh Apostle is named Judas, son of James. (Lk 6:16 & Acts 1:13). Judas Iscariot, the traitor is next on the list, so that Judas, son of James, is known generally as Jude to show the difference between the two. So probably Judas or Judah was a common name. Judas, not Iscariot, asks Jesus a question at the Last Supper in John’s Gospel. (Jn 14:22) So the Gospel of John seems to agree with Luke’s version of the name.

The plot thickens however. In Mark and Matthew’s Gospels another Jude is mentioned. The people of Nazareth on seeing Jesus and his miracles ask, ‘Is not his mother the woman called Mary and his brothers, James and Joseph and Simon and Jude.’ (Mt 13:55 & Mk 6:3). The question then seems to be how many people are we talking about? Are Thaddeus and Jude the same person, and is it possible that he is a ‘brother of the Lord?’ Thaddeus seems to be a nickname, meaning big chested, or hearted. And it does seem that Jesus was good at giving new names to his twelve chosen. Simon was now Peter meaning ’rock’, Thomas called the twin. Certainly the tradition of the church would put all three together, Origen, an early Christian, is one who is quoted. Other Scripture scholars, including very reputable ones like Raymond E Brown would argue for two distinct people. Interestingly because of the lack of agreement over the names in the lists of the 12 apostles, he says that ‘and so by the time the evangelists wrote, amidst agreement about Jesus’ choice of the twelve, recollection of the minor members was uncertain.’

As we’ll see, the ‘minor member’ of the twelve has become, for that very reason, the one that people have novenas to. Ss Philip or Bartholomew or even Matthew don’t have the following that our St Jude does. ‘The name of the traitor has caused you to be forgotten by many’ is part of the Novena prayer.

What happened after Pentecost? Luke places Jude in the upper room when the Holy Spirit came upon the disciples of Jesus. Some time ago Pope John Paul II was in Armenia and said, ‘I am deeply moved as I think of the glorious history of Christianity in this land, going back according to tradition to the preaching of the Apostles Thaddeus and Bartholomew.’ In our litany later we’ll pray that Jude preached the gospel in Persia. Armenia or Persia, or maybe that the Empire of Persia included the country of Armenia and its capital Edessa. The king there Abgar suffered from a ‘terrible physical disorder’ (Eusebius pg 64), probably leprosy, had sent asking for Jesus’ help. Jesus reply was that he would send someone when he could. Jude answered the call after Pentecost and healed the king, leading to the conversion of many in Edessa. Some versions of this story include the part that the King wanted a picture of Jesus. The artist he sent was unable to carry out this request ‘blinded by the splendour of the saviour’s face’. Hence Jude carries an image of the Saviour. The story is that, like Veronica’s cloth, Jesus impressed his features on a cloth. However I personally like the idea that the reason for the picture is because of his question at the Last Supper, ‘Do you intend to show yourself to us and not to the world.’ So Jude shows the Lord to the world.

The tradition then is that Jude returned to Jerusalem for the council at which the question of preaching to Gentiles was settled. It is also said that he was there when Simon, remember one of ‘the brothers of Jesus’, was made bishop of Jerusalem after the martyrdom of James, the first bishop. Thereafter where did Jude travel taking the good news? Again we find ourselves in Persia or Mesopotamia, modern Iraq and Iran if you like. Here we find ourselves in the litany, that Jude imposed silence on demons and confounded their oracles. The worship of idols was fairly commonplace in the religions of the ancient Middle East, hence the commandment not to worship them in the 10 commandments. The story is told that Jude and now Simon the Zealot rather than Bartholomew, in the name of Jesus, prevented the idols from talking to the priests of their religion, until commanding them to speak they were forced to acknowledge the saints a the disciples of the true God. The demons were then cast out, shattering the statues. This happened as the Persians were preparing to be invaded from the East. The false oracles or seers proclaimed that the war would be long and many would die. Jude and Simon however were able to say that even the following day ambassadors would appear suing for peace. And so they did. And so in the litany Jude foretold to a weak prince an honourable peace with a powerful enemy. Jesus at the ascension said that one of the signs of believers would be to be unharmed by serpents, and so also there are stories of overcoming deadly serpents.

All of this confrontation with the religion of the country had its conclusion when along with Simon, Jude gained the crown of martyrdom. It is generally believed that Jude was beaten with clubs and then finished off with an axe blow to the head. Hence Jude carries a club, and in some pictures carries an axe.

This is the saint that we are invoking. He is Thaddeus, the big-hearted. The one who got from Jesus the promise that He and the Father would make their home in our hearts. He is a ‘minor member’ of the 12, easily forgotten, and yet a worker of miracles, and one prepared to ‘show’ the Lord to us, no matter the cost.

If you can’t find what you’re after, please use the search facility.

Let us know if there’s anything you would like to see featured or improved. Just e-mail anyone in the list below.
Priest (Fr Okereke)
Feedback & contributions
Fault reporting
We can be found at:
159 Pendeen Road Glasgow G33 4SH.
map
Links to other pages:
Changes and Updates
Child Protection Statement
Ecumenism
History of the Parish
Liturgical Ministries
Mission Statement
Non-liturgical Ministries
Other sites of interest
Prayer
RCIA
Sisters of Notre Dame
Society of St Vincent de Paul
Special Collections
St John Ogilvie
Novena in Honour of St John Ogilvie
St Jude
Novena in Honour of St Jude
Stations of the Cross
Who's Who
Worship

We use cookies on our website to give you the most relevant experience by remembering your preferences and repeat visits. By clicking “Accept All”, you consent to the use of ALL the cookies. However, you may visit "Cookie Settings" to provide a controlled consent.
Cookie SettingsAccept All
Manage consent

This website uses cookies to improve your experience while you navigate through the website. Out of these, the cookies that are categorised as necessary are stored on your browser as they are essential for the working of basic functionalities of the website. We also use third-party cookies that help us analyse and understand how you use this website. These cookies will be stored in your browser only with your consent. You also have the option to opt out of these cookies. But opting out of some of these cookies may affect your browsing experience.
Necessary Always Enabled
Necessary cookies are absolutely essential for the website to function properly. These cookies ensure basic functionalities and security features of the website, anonymously.
Functional
Functional cookies help to perform certain functionalities like sharing the content of the website on social media platforms, collect feedbacks, and other third-party features.
Performance
Performance cookies are used to understand and analyze the key performance indexes of the website which helps in delivering a better user experience for the visitors.
Analytics
Analytical cookies are used to understand how visitors interact with the website. These cookies help provide information on metrics the number of visitors, bounce rate, traffic source, etc.
Advertisement
Advertisement cookies are used to provide visitors with relevant ads and marketing campaigns. These cookies track visitors across websites and collect information to provide customized ads.
Others
Other uncategorized cookies are those that are being analyzed and have not been classified into a category as yet.
SAVE & ACCEPT